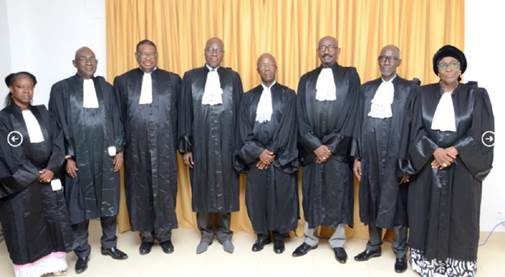 The Constitutional Council is now complete with the appointment by the President of the Republic of three new members, July 27, 2021.

The Head of State has appointed three new judges to the Constitutional Council, thus bringing to full the number of seven Sages composing this jurisdiction.

The magistrate, Aminata Ly Ndiaye, previously First President of the Court of Appeal of Thies, was appointed to complete the mandate of Bousso Diao Fall, late member of the constitutional court.

The Ministry of Justice reports that Seydou Nourou Tall, a university professor and current member of the Constitutional Council, will become Vice President.

The composition of the Constitutional Council was incomplete following the death of one of its members in January and the end of the terms of two others at the end of June.

The constitutional council recently rejected appeals from the opposition, even though "it can only deliberate in the presence of all its members, except for the temporary impediment of up to three of them, duly noted by the other members," according to the organic law governing its functioning.

The ruling on the rejection of an appeal by the opposition against the recent amendment of the Criminal Code and the Code of Criminal Procedure has thus raised strong criticism from political actors and legal specialists.

The Constitutional Council of Senegal is a founding member of the CJCA since May 2011.