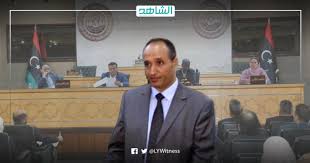 Counsel Abdullah Abu Rizeza has been a member of the Supreme Court circuit since 2017, and his origins go back to the southern region of Libya (Fezzan Province).

Abu Rizeza worked earlier as head of the Center for Judicial Expertise, and during his work at the center, he conducted development operations for the departments affiliated with the center, and established several new departments, such as: The Criminal Experience Department
He also worked on developing the center's staff, facilitating their access to several training courses with the aim of developing them at home and abroad, and opening a number of branches in various regions and cities, especially in the fields of forensic medicine and the counterfeiting and counterfeiting department.
During his work, Abu Rizeza considered the principle of the independence of the judiciary from politics, and the guarantee of the unity of the judiciary in all cities and regions, unlike other institutions that suffered from division due to the political situation.

The Supreme Court in Libya is the highest judicial authority and exercises its jurisdiction as a constitutional court, a court of cassation, in civil, commercial, and legal matters, an administrative court, a special court for electoral appeals, in addition to the role of fatwa and legislation since its establishment.